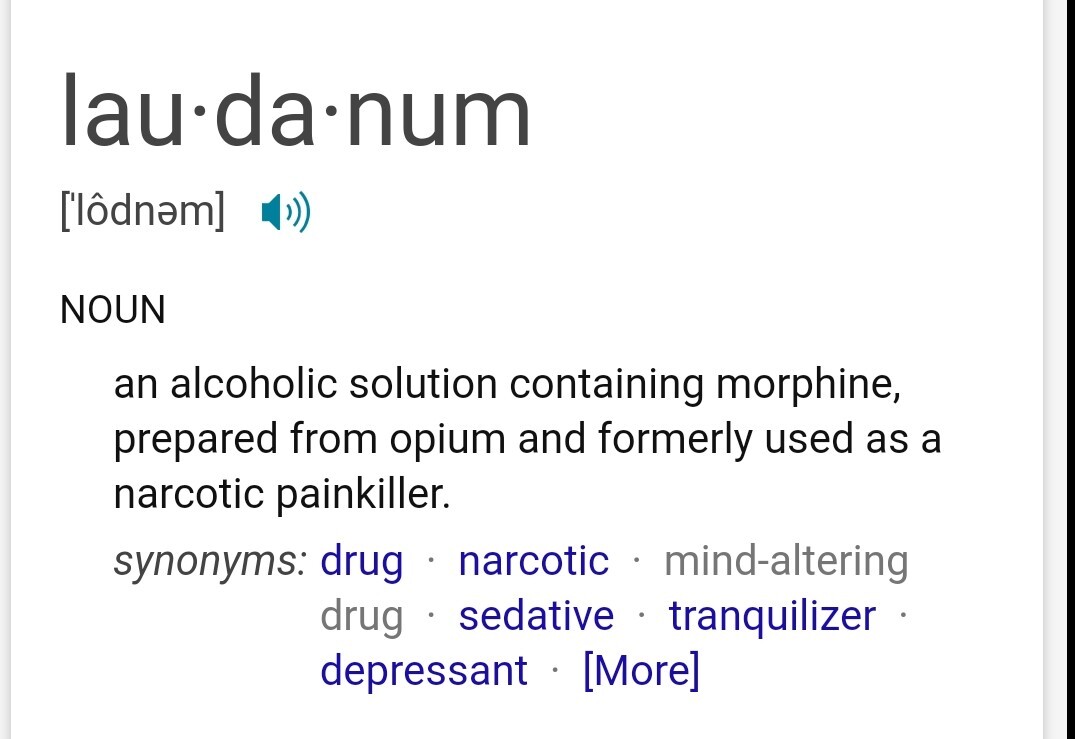 " Laudanum was supplied to druggists and physicians in regular and concentrated versions. For example, in 1915, Frank S. Betz Co., a medical supply company in Hammond, Indiana, advertised Tincture of Opium, U.S.P., for $2.90 per lb., Tincture of Opium Camphorated, U.S.P, for 85 cents per lb., and Tincture of Opium Deodorized, for $2.85 per lb. Four versions of opium as a fluid extract were also offered: (1) Opium, Concentrated (assayed) "For making Tincture Opii (Laudanum) U.S.P. Four times the strength of the regular U.S.P." tincture, for $9.35 per pint; (2) Opium, Camphorated Conc. "1 oz. making 8 ozs. Tr. Opii Camphorated U.S.P (Paregoric)" for $2.00 per pint; (3) Opium, Concentrated (Deodorized and Denarcotized) "Four times the strength of tincture, Used when Tinct. Opii U.S.P. is contraindicated" for $9.50 per pint, and (4) Opium (Aqueous), U.S.P., 1890, "Tr. (assayed) Papaver Somniferum" for $2.25 per pint.

In 1929–30, Parke, Davis & Co., a major US drug manufacturer based in Detroit, Michigan, sold "Opium, U.S.P. (Laudanum)", as Tincture No. 23, for $10.80 per pint (16 fluid ounces), and "Opium Camphorated, U.S.P. (Paregoric)", as Tincture No. 20, for $2.20 per pint. Concentrated versions were available. "Opium Camphorated, for U.S.P. Tincture: Liquid No. 338" was "exactly 8 times the strength of Tincture Opium Camphorated (Paregoric) [italics in original], U.S.P., "designed for preparing the tincture by direct dilution," and cost $7 per pint. Similarly, at a cost of $36 per pint, "Opium Concentrated, for U.S.P. Tincture: Liquid No. 336", was "four times the strength of the official tincture", and "designed for the extemporaneous preparation of the tincture". The catalog also noted: "For quarter-pint bottles add 80c. per pint to the price given for pints."

-----------------
Nurses were spoon-feeding this potion to infants to pacify them. Pharma was in her earliest years and it would appear from the get-go that kids were considered fair game. Also suggests an agenda to addict as early as humanly possible. Although prohibition raged to cast out the demon of alcohol addiction pharma is busy creating opioid addicts in the cribs of the United States of Hypocracy.
Last edited: Apr 16, 2022
You must log in or register to reply here.
Share:
Facebook Twitter Reddit Pinterest Tumblr WhatsApp Email Share Link
Top