The Assassination of John F Kennedy 59 Yrs On 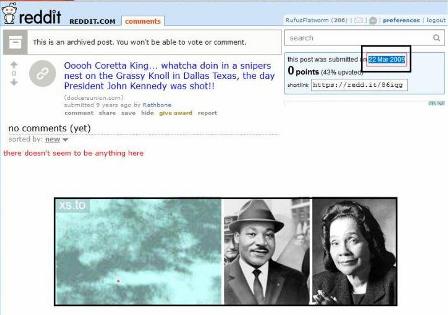 Ooooh Coretta .. this is the truth that has been in the public arena since Coretta King's visage emerged during computer processing of the Moorman shot in 2009, millions in news broadcasting, at the CIA, the FBI, the Secret Service and in the US Attorney General's Office, will be required to defend capital charges either as primary conspirators or for perpetuating the coverup.
Click to expand... 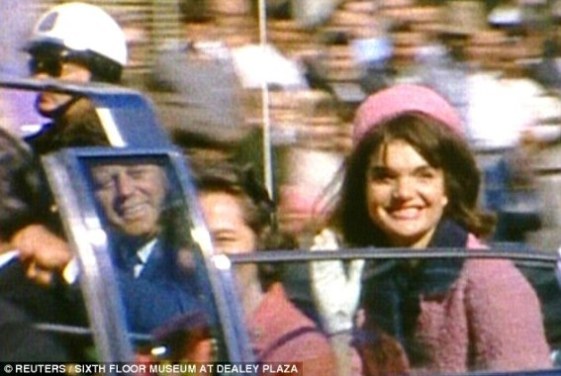 The Kennedys moments before the shots were fired ..
Click to expand... 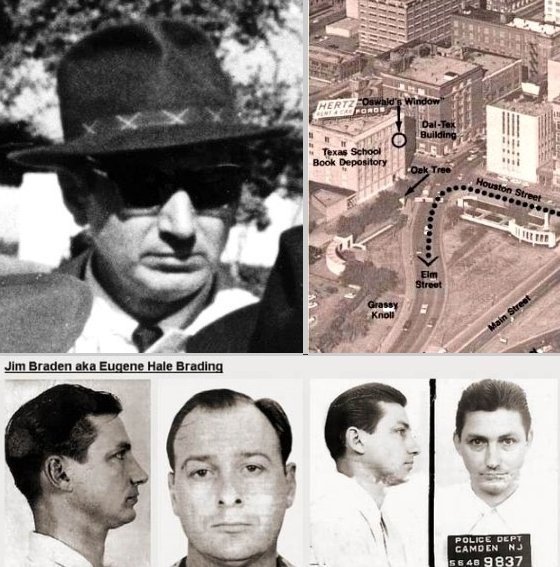 Jim Braden fired the first shot from the roof of the Dal Tex Building across Houston Street from the Texas School Book Depository, he was taken in by a Deputy Sheriff before being released.
Click to expand... 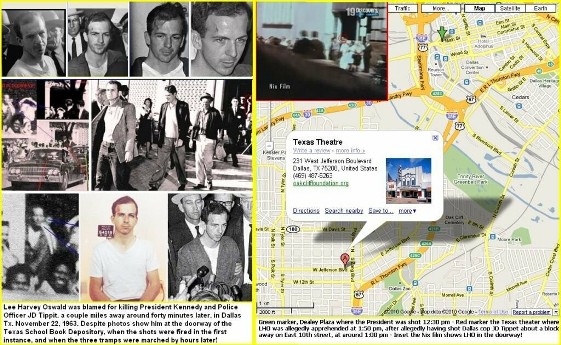 Lee Harvey Oswald was blamed for shooting the President and Dallas Police Officer JD Tippit a couple miles away around forty minutes later. Despite photographs and film show him at the doorway of the TSBD when the shots were fired in the first instance, and show he was still in the doorway when the "Three Tramps" were marched by hours later, similarly exculpating him for the murder of Officer Tippit.
Click to expand... 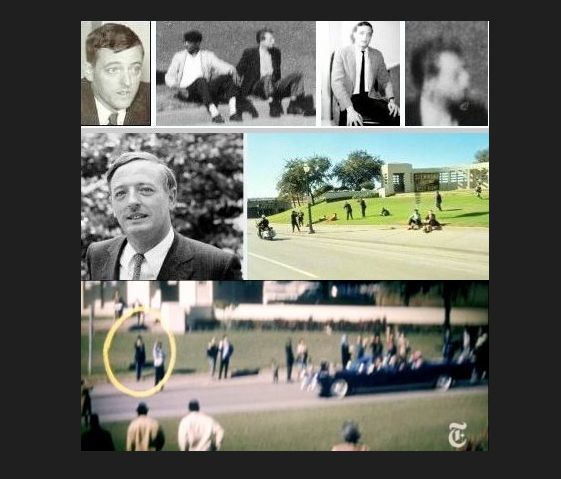 William F Buckley was "Umbrella Man" who signaled the shooters on the Grassy Knoll all systems were go, his accomplice was Corsican adventurer Lucien Sarti, after the assassination Buckley and his CIA classmate E Howard Hunt went to Mexico, and are thought to have engineered the 1968 Tlatelolco Massacre that had a death toll of thousands. Link.
Click to expand... 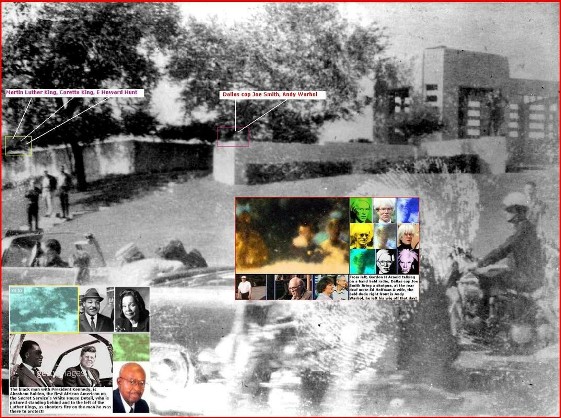 The Moorman Photograph has snipers nests on the Grassy Knoll with muzzle flashes behind the picket fence left screen, E Howard Hunt is firing Martin Luther & Coretta King are standing to his right, Afro Secret Serviceman Abraham Bolden is behind and to Coretta’s left, the Badgeman enhancement has Dallas Cop Joe Smith firing from behind the Rotunda Wall, in company with Gordon H Arnold, deaf mute Ed Hoffman & Wife and Andy Warhol.
Click to expand... 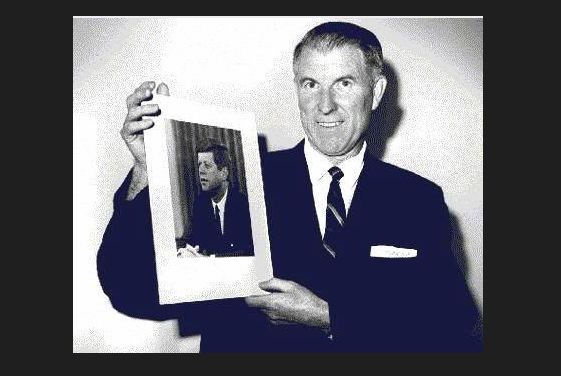 As the limousine emerged from behind the freeway sign the driver William Greer turned and looked over his right shoulder, he turned back and while holding the steering wheel with his left hand, retrieved something from under the dash with his right hand. Graphic, transferring the object to his left hand and turning back around to look at the President, he brought his left hand around his body and aimed and fired at John Kennedy’s head.
Click to expand... 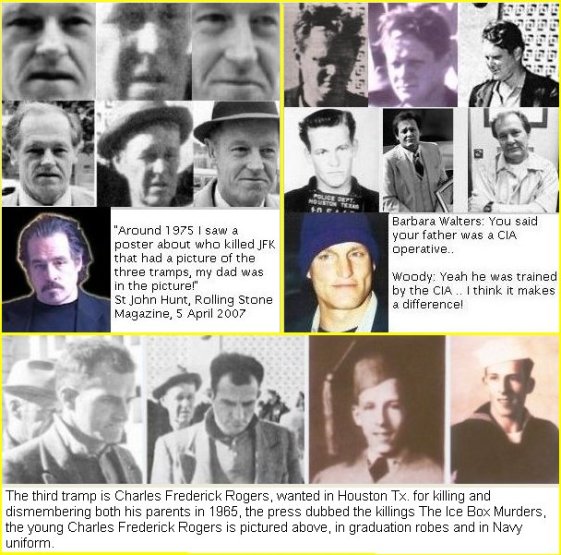 The Three Tramps were E Howard Hunt of Watergate fame, Charles Harrelson father of television actor Woody Harrelson, and Charles Frederick Rogers wanted in Houston TX. for killing and dismembering both his parents in 1965. The Ice Box Murders.
Click to expand... 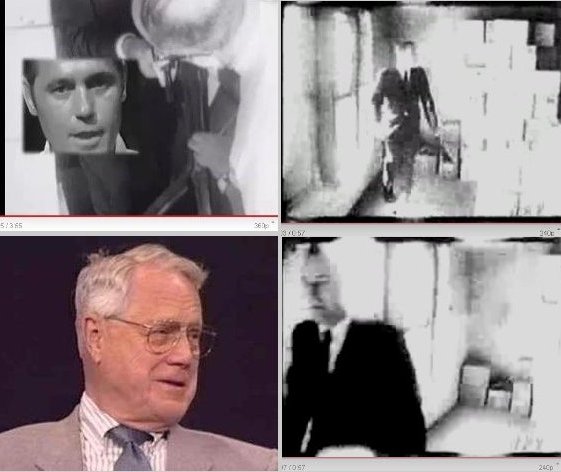 Ted Gunderson[/URL] was FBI Bureau Chief in Dallas when President Kennedy was murdered, after the shooting he was filmed in possession of one of two rifles on the sixth floor of the TSBD, Gunderson was in Memphis when Martin Luther King was shot, and in Los Angeles when Senator Robert Kennedy was slain - He was part of the Franklin Case cover up that goes back nearly forty years, whereas Rusty Nelson testified Hunter S Thompson paid him $100,000 a time to film snuff killings to the tune of around fifty dead!
Click to expand...

Jim Lehrer formerly of PBS News was in Dallas "that fateful day" in his words, with former PBS co host Robert MacNeil both part of the White House Press Corps, MacNeil's testimony has supported the official story ever since. He says he heard a single shot then two more in quick succession, he says he went into the portal of the TSBD where he encountered a young man he subsequently identified as Lee Harvey Oswald, who he says directed him to the nearest telephone, Lehrer says he stayed at Dallas Love Field with Air Force One.
Click to expand...

MacNeil's testimony confirms LHO was in the doorway of the TSBD throughout the drama.Ed

As well as identifying the shooters on the GK, the Moorman shot reveals about twenty muzzle flashes, including Smith's shot from the corner of the Rotunda Wall, and the "Oliver Stone" flash from further along the fence line.
Click to expand... 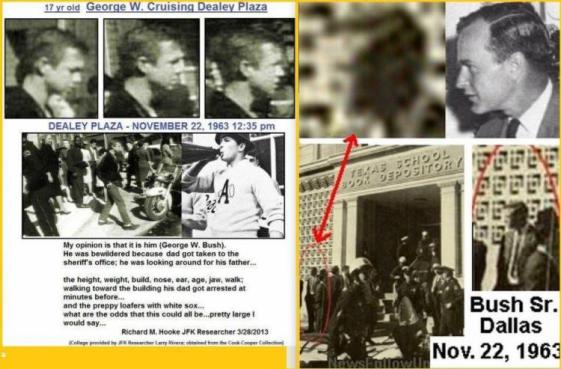 At plus eighteen hrs around 9:30 pm on the evening of November 23, 1963, Australian radio played a tape recording of the JFK assassination wherein Mrs Kennedy's voice was clearly heard calling "hello Coretta" followed by a volley of gunfire. The presenter explained Coretta was the wife of one Reverend Martin Luther King, he played a slowed down version of the tape and asked listeners how many shots they could hear, he said he counted about nineteen his studio guest said she counted twenty two.

That was the only time the Luther Kings were associated with the crime until whispers were heard at the time of the 1968 Democratic National Convention in Chicago .. although he was feted and fabulized by the same ppl who propounded the LHO lone assassin scenario there was no money the black ---- was broke. He went to the source had roped him into the conspiracy in the first place read George HW Bush, and asked for dough to be told there was none, so he chanced his arm at blackmail presumably assuring GHWB if he was not paid everyone would get to hear about what went on in Dallas .. he laughed him off.
Click to expand... 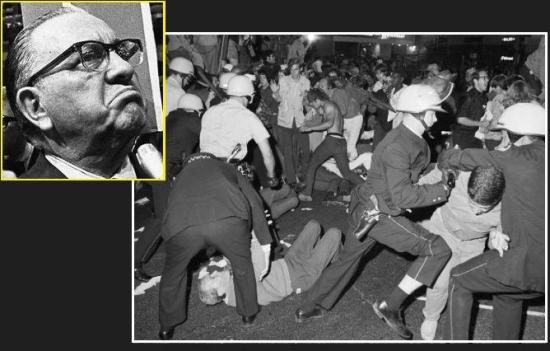 Where after some short time later on April 4, 1968 Luther King was shot dead by sniper fire while standing talking on the telephone on a hotel balcony in Memphis, we will say GHW Bush shot him for attempted blackmail. That in reprisal LK's antecedents took time out at the August 1968 DNC to drop the bombshell of his and Coretta's involvement, and that the ultra police violence blamed on Chicago Mayor Richard Daley that marred the event was to smokescreen the Dallas material.
Click to expand... 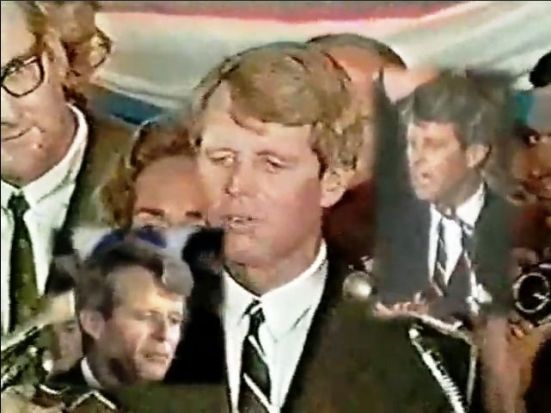 Evidence of Revision Part 4, compiled from thousands of television news tapes detailing neglected or ignored evidence re the death of United States Senator Robert Kennedy, including evidence from the Los Angeles Coroner that the shots that killed Robert Kennedy were fired into his head..
Click to expand... 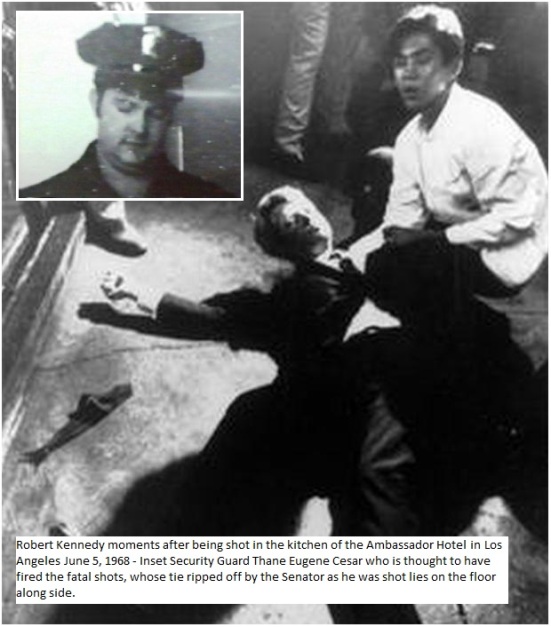 From a distance of between one and three inches from behind and below his right ear, Sirhan Sirhan who was convicted for the killing was several feet to his front, the film has footage of the LA DA simply brushing that aside, Security Guard Thane Eugene Cesar is thought to have fired the fatal shots.
Click to expand... 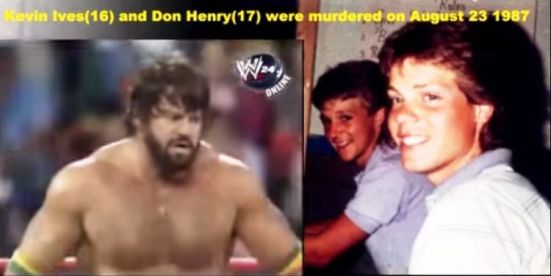 Murder on the Tracks, former pro wrestler Billy Jack Haynes who says he was present at the killing of 17 yo Kevin Ives and 16 yo Don Henry, who stumbled onto a drugs drop near Mena Arkansas in August 1987, admits trafficking cocaine he got from murdered CIA drugs pilot Barry Seal.

Haynes says Seal introduced him to a politician drug dealer from Arkansas - William Jefferson Clinton - who in 1984 asked him to kill David Kennedy, son and nephew of Senator Robert and President John Kennedy .. DK was in Florida attending a family celebration and was staying at the Brazilian Court Hotel & Beach Club in Palm Beach.

He was found dead there April 25, 1984 allegedly from a drug overdose after staff checked his welfare allegedly at the insistence of family members, another Kennedy brother had been staying in the same hotel and had checked out prior to the body being found .. we know most often ppl get murdered either by friends or by family members.

That being said a diligent investigator would immediately assume DK's family wanted him dead for whatever reason, to which end the other brother introduced him to BJH who had accepted the contract to kill him, that it was he who had requested hotel staff to check his welfare. The same prosecutor would suppose Clinton must be the man the upper classes got in touch with if they wanted someone dead, that he could arrange it all upon payment of a suitable fee. David Kennedy's Death.
Click to expand... 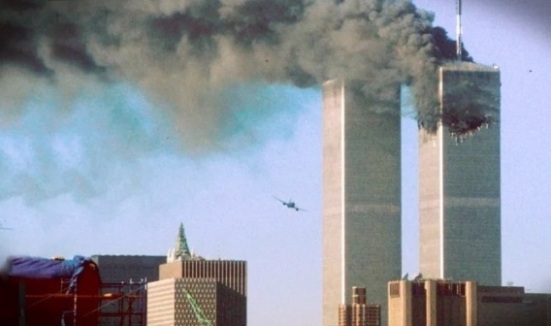 The same Rabbi Dov Zakheim pioneered tech that allowed remote controlled planes to be flown into the Twin Towers at the WTC Sept. 11, 2001, was allegedly used to cause the July 16, 1999 plane crash that allegedly took the lives of John F Kennedy Jr his wife and her sister, which was allegedly to ensure Hillary Clinton's elevation to the US Senate.
Click to expand... 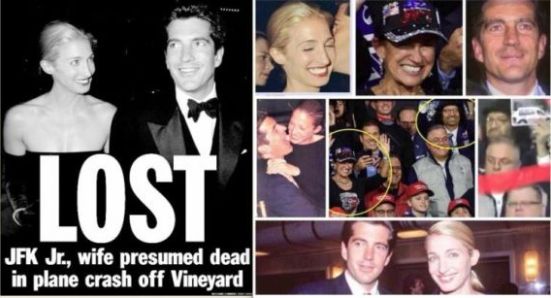 However this undated montage shows JFK Jr and his wife Carolyn Jeanne Bessette-Kennedy both of whom allegedly perished in the crash alive & well, foreground figures are wearing MAGA hats which indicates the montage was assembled during the Trump Presidency in any case .. yeah the scope of the deception boggles the mind.
Click to expand...

The ppl at Interested Party say "Watergate Conspirator G Gordon Liddy murdered Officer Tippit in Dallas in a botched plot to replace President Kennedy's body to hide evidence of multiple shooters, that nearly every member of the DPD was in on the conspiracy."
Click to expand... 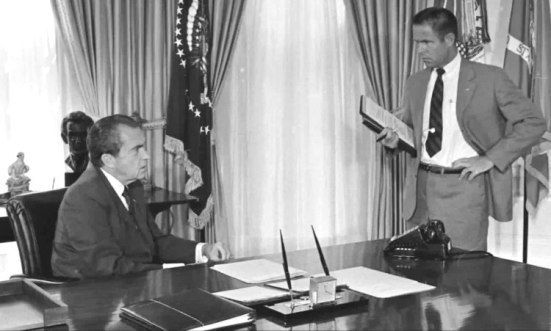 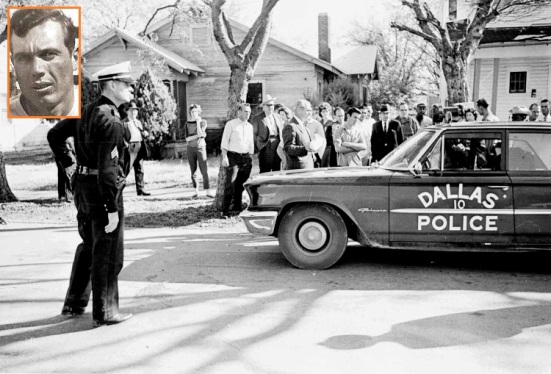 Jim Garrison: The Murder of Officer J.D. Tippit, and the “Second” Oswald.

Here we say Tippit got wind of the conspiracy to murder the President and went to the FBI, which was at that time in Dallas run by arch conspirator Ted Gunderson which absolutely sealed his fate
Click to expand... 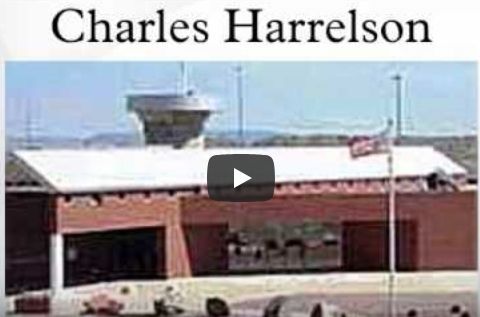 From 4:20 the narrator speaks of Charles Harrelson's admission he fired on President John Kennedy in Dallas TX. Nov. 22, 1963.
Click to expand...